The Particle bombardment device, also known as the gene gun, was developed to enable penetration of the cell wall so that genetic material containing a gene of interest can be transferred into the cell. Today the gene gun is used for genetic transformation of many organisms to introduce a diverse range of desirable traits.

Plant transformation using particle bombardment follows the same outline as Agrobacterium-mediated method. The steps taken include: 1) isolate the genes of interest from the source organism; 2) develop a functional transgenic construct including the gene of interest; promoters to drive expression; codon modification, if needed to increase successful protein production; and marker genes to facilitate tracking of the introduced genes in the host plant; 3) incorporate into a useful plasmid; 4) introduce the transgenes into plant cells; 5) regenerate the plants cells; and 6) test trait performance or gene expression at lab, greenhouse and field level.

The particle bombardment method starts with coating tungsten or gold particles (microprojectiles) with plasmid DNA. The coated particles are coated on a macro-projectile, which is accelerated with air pressure and shot into plant tissue on a petri plate (Gan, 1989), as shown in Figure 1. A perforated plate is used to stop the macro-projectile, while allowing the microprojectiles to pass through to the cells on the other side. As the microprojectiles enter the cells, the transgenes are released from the particle surface and may incorporate into the chromosomal DNA of the cells. Selectable markers are used to identify the cells that take up the transgene. The transformed plant cells are then regenerated into whole plants using tissue culture.

Particle bombardment also plays an important role in the transformation of organelles such as chloroplasts, which enables engineering of organelle-encoded herbicide or pesticide resistances in crop plants and to study photosynthetic processes. Limitations to the particle bombardment method relative to Agrobacterium-mediated transformation include frequent integration of multiple copies of the transgene at a single insertion site, rearrangement of the inserted genes, and incorporation of the transgene at multiple insertion sites. These multiple copies can be linked to silencing of the transgene in subsequent progeny (Yao et al., 2006). Figure 2 and 3 show the different types of gene guns that are currently used in plant transformation. 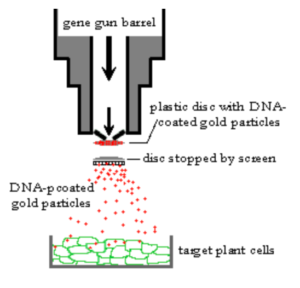 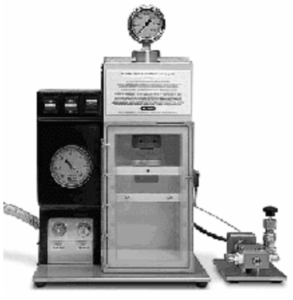 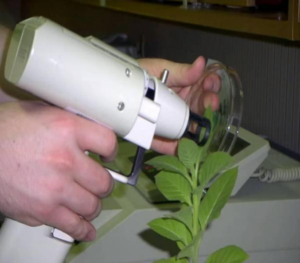