Agrobacterium tumefaciens is a widespread naturally occurring soil bacterium that causes crown gall, and has the ability to introduce new genetic material into the plant cell (Gelvin, 2003). The genetic material that is introduced is called T DNA (transferred DNA) which is located on a Ti plasmid. A Ti plasmid is a circular piece of DNA found in almost all bacteria.

During transformation, several components of the Ti plasmid enable effective transfer of the genes of interest into the plant cells. These include:

The Agrobacterium-mediated transformation process involves a number of steps: (a) isolation of the genes of interest from the source organism; (b) development of a functional transgenic construct including the gene of interest; promoters to drive expression; codon modification, if needed to increase successful protein production; and marker genes to facilitate tracking of the introduced genes in the host plant; (c) insertion of the transgene into the Ti-plasmid; (d) introduction of the T-DNA-containing-plasmid into Agrobacterium; (e) mixture of the transformed Agrobacterium with plant cells to allow transfer of T-DNA into plant chromosome; (f) regeneration of the transformed cells into genetically modified (GM) plants; and (g) testing for trait performance or transgene expression at lab, greenhouse and field level. Figure 1 illustrates Agrobacterium-mediated plant transformation. . 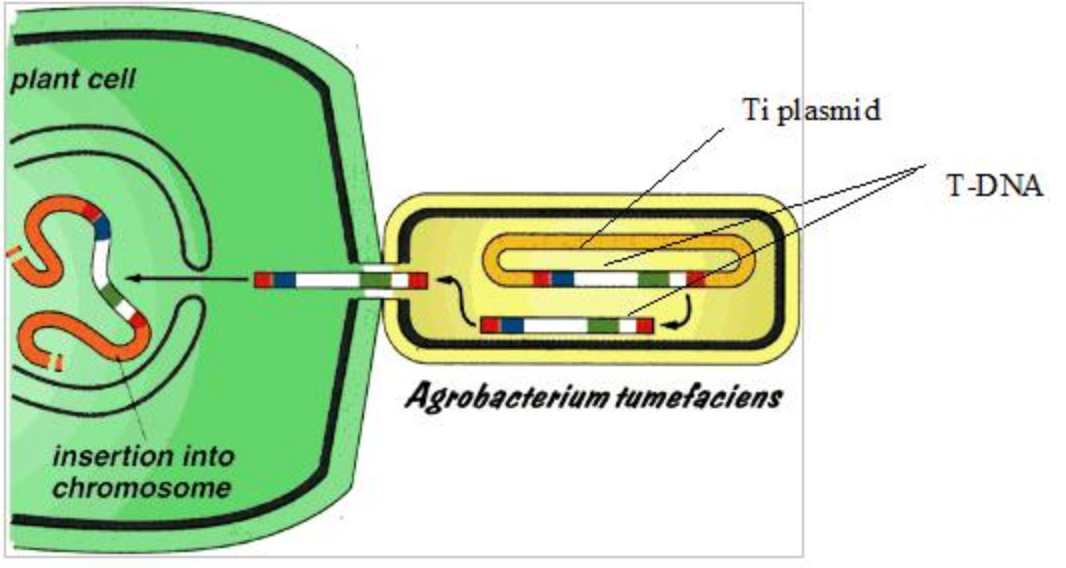 The overall advantages of using Agrobacterium-mediated transformation over other transformation methods are: reduction in transgene copy number, and intact and stable integration of the transgene (newly introduced gene) into the plant genome (Jones et al., 2005).